MORE THAN 25 YEARS OF EXPERIENCE IN LAOS TRAVEL & TOURISM INDUSTRIES

WE ARE COMMITTED TO MAINTAINING SUSTAINABLE RELATIONSHIPS AND CREATING POSITIVE IMPACTS ON THE ANIMALS, LAND & COMMUNITIES OF LAOS.

More than 25 years of experience in the travel & tourism industries. Manifa Travel Co.,Ltd and Manifa Elephant Camp are privately owned and family run nature friendly operations with a driving passion for education, growth & longevity. Our focus is on learning, development & training opportunities for all and staff and communities of the surrounding villages as well as ensuring excellent safe work and living conditions for all employees and elephants

We offer a varied range of destinations and itinerary suggestions. Unique visitor packages to all the historical and natural sites, plus an assortment of adventure activities and enjoyable experiences to suit everybody

The Name of “Manifa”

A wide range of adventure tour packages in Luang Prabang.

One of the largest elephant camp around Luang Prabang, approximately 20 km from city center.

Pai is the sole owner, passionate founder and committed director of Manifa Travel,.Co Ltd and Manifa Elephant Camp. He is a hands on, active and humble entrepreneur who remains focused as he successfully leads and oversees all operations of his privately run companies in Luang Prabang Pai has helped many people and communities by providing training and employment opportunities, aimed specifically to underprivileged locals from the surrounding provinces Pai is an esteemed and extremely well respected member of many important international elephant welfare organisations. He maintains close working relationships with key government officials, foundations, international elephant care organisations and is a active member of many communities throughout Laos

2003
Pai was one of the first to open a internet cafes in Luang Prabang. Quickly he realized the potential to expand and head branched out into other services like, money exchange (this was before ATM’s and then the only one bank branch in town was only for locals!). Later adding developing film, burning CD’s and sold the first memory stick in town

2005
Pai realized the need for transport solutions in Luang Prabang and opened Kuang Si minivan service which included the Lao version of a TUK TUK – the 3 wheel jąmbǫh (jumbo) which can hold 4-6 passengers on two facing seats!

Pai started out small as a local tour agent with a focus on resorts and accommodation. Within the first year of operations he had expanded to a team of 7 employees and widened the scope of the tours on offer, which added to the rapid growth of the agency

2007
By the end of 2006 the team had outgrown their office and opened two larger more centrally located agent outlet offices in old town Luang Prabang. The team doubled in size, additional vehicles were added to the fleet together with a private garage and storage facility 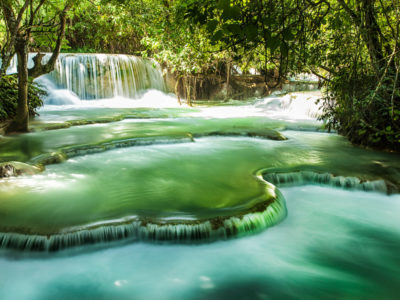 After his first years of experience with these 3 elephants, immediately he knew the future direction he would build his company towards

Pai continues to lead, develop and grow everything at Manifa Elephant camp. Positively heading for a bright future for Laos